At The FM Class

Getting acquainted with the Flute 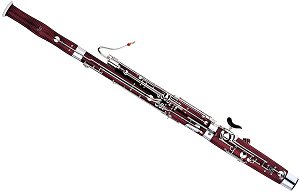 A wooden conical wind instrument, sounded with a double reed, which forms the tenor and bass to the woodwind section. In the modern orchestra, the family exists in two different sizes: the bassoon and the double bassoon or contrabassoon, sounding one octave lower. Built in four joints, its precursor the dulcian was of one-piece construction.

Because of its wide compass and its range of characteristic tone-colours, from richly sonorous at the bottom to expressively plaintive at the top, it is one of the most versatile and useful members of the orchestra. Certain design features are peculiar to it: the doubling back on itself of the bore, like a hairpin; the ‘extension bore’ beyond the sixth finger-hole; and local wall thickness allowing for finger-hole chimneys. These features give the instrument its essential tone qualities and condition its complex acoustics. The standard compass of the present-day bassoon is from Bb' to f'' or g''. It is a non-transposing instrument and its music is notated in the bass and tenor clefs; occasionally the treble clef is also used.

In the Hornbostel-Sachs classification it is classified as an oboe.

The modern bassoon exists in two versions: the German or ‘Heckel’ system, and the French or ‘Buffet’ system of differing keywork and slightly modified bore. As the German type is more commonly used today, it provides the frame of reference for general statements here about the construction of the modern bassoon.

When played, the bassoon is held obliquely across the body. Its considerable weight is supported by means of a neck strap or shoulder harness attached to a ring on the butt, a seat strap or adjustable spike attached to the bottom of the butt, or a leg support fitted to the top of the butt.

Like the oboe, the bassoon uses a double reed of which the most suitable quality grows in the Var district of southern France.

As from the 18th century and on, works for bassoon with orchestra fall into two categories: The first consists of concertos written by professional composers, usually with specific players in mind. Among these are notable works by Danzi, David, Michael Haydn, J.N. Hummel, J.W. Kalliwoda, Kozeluch and Berwald. In the second category are works written as display pieces by performers (usually for their own use), for example Gebauer, Jacobi and Almenraeder. According to the fashion of the time, these often took the form of pot-pourris and variations.

Among the vast output of the 20th century, the following works are noteworthy: concertos and other concert works by Elgar, Wolf-Ferrari, Villa-Lobos, Jolivet, Françaix, Jacob and Maconchy; recent British works by John Addison, Judith Bingham, Stephen Dodgson, Robin Holloway, John Joubert and Peter Maxwell Davies, and in North America by Elliott Schwartz, Gunther Schuller, John T. Williams and E.T. Zwilich; a concerto by the Russian composer S.A. Gubaydulina (along with two other significant works for bassoon); concertante works by Strauss (clarinet and bassoon) and Hindemith (trumpet and bassoon); sonatas and other works by Tadeusz Baird, Roger Boutry, Eugène Bozza, Mario Castelnuovo-Tedesco, Dutilleux, Hindemith, Hurlstone, Longo, Nussio, Saint-Saëns, Skalkottas – his Sonata Concertante (1943) is the outstanding sonata of the century – and Tansman (a sonata by Poulenc, 1957, remained unfinished at his death and is lost); unaccompanied solo pieces by Apostel, Arnold, Bruno Bartolozzi, Jørgen Bentzon, Berio, Boulez, Jacob, Stockhausen and Isang Yun; bassoon ensembles by Bozza, Victor Bruns, Alois Hába, Jacob, Prokofiev, William Schuman and Peter Schickele; and bassoon and string works by Kalevi Aho, Bax, Françaix and Jacob. The increased prominence given to the bassoon in many 20th-century orchestral scores is exemplified by the opening of The Rite of Spring, a solo in the upper register.

The modern double or contrabassoon is basically similar in construction to the bassoon. The normal compass extends from Bb' ' to c'. Modern instruments, mostly of the ‘compact’ model, stand about 122 cm tall with a bore length of 5·5 m.

The contrabassoon is a transposing instrument, notated one octave higher than it sounds. While the upper register is weak, it is in the lower register that the contrabassoon sounds at its best, lending a rich organ-like sonority to the full wind section.

Modern scores often demand the player to double between bassoon and contra, a maneuver often requiring considerable dexterity. During the era of acoustic recording, the instrument proved an indispensable reinforcement for the string bass.

Its use in a solo context is only a recent development. As early as 1922 Ervín Schulhoff scored his Bassnachtigal for unaccompanied double bassoon, partly for extra-musical reasons; more recently concert works have been written by Henk Badings, Victor Bruns, Ruth Gipps, Roger Smalley and Gunther Schuller. There are compositions for double bassoon and piano by Victor Bruns and Vítězslav Novák.

Event: Works by Verdi and Mendelssohn

Event: Works by Bizet and Ravel

This website is the governmental property of the Lebanese Republic and is affiliated to the ministry of Culture.

The website only saves the information used to subscribe to the newsletter and does not share it with any other institution or server of company of any kind.

The website does not activate or manage software for statistic purposes and does not keep track or produce logs of any kind that concern the guest activities and browsing. The hosting company of the website provides this log automatically for all its clients.

The information diffused on the newsletter can’t be guaranteed to happen on the announced dates, problems might happen and prevent the event without prior notice. 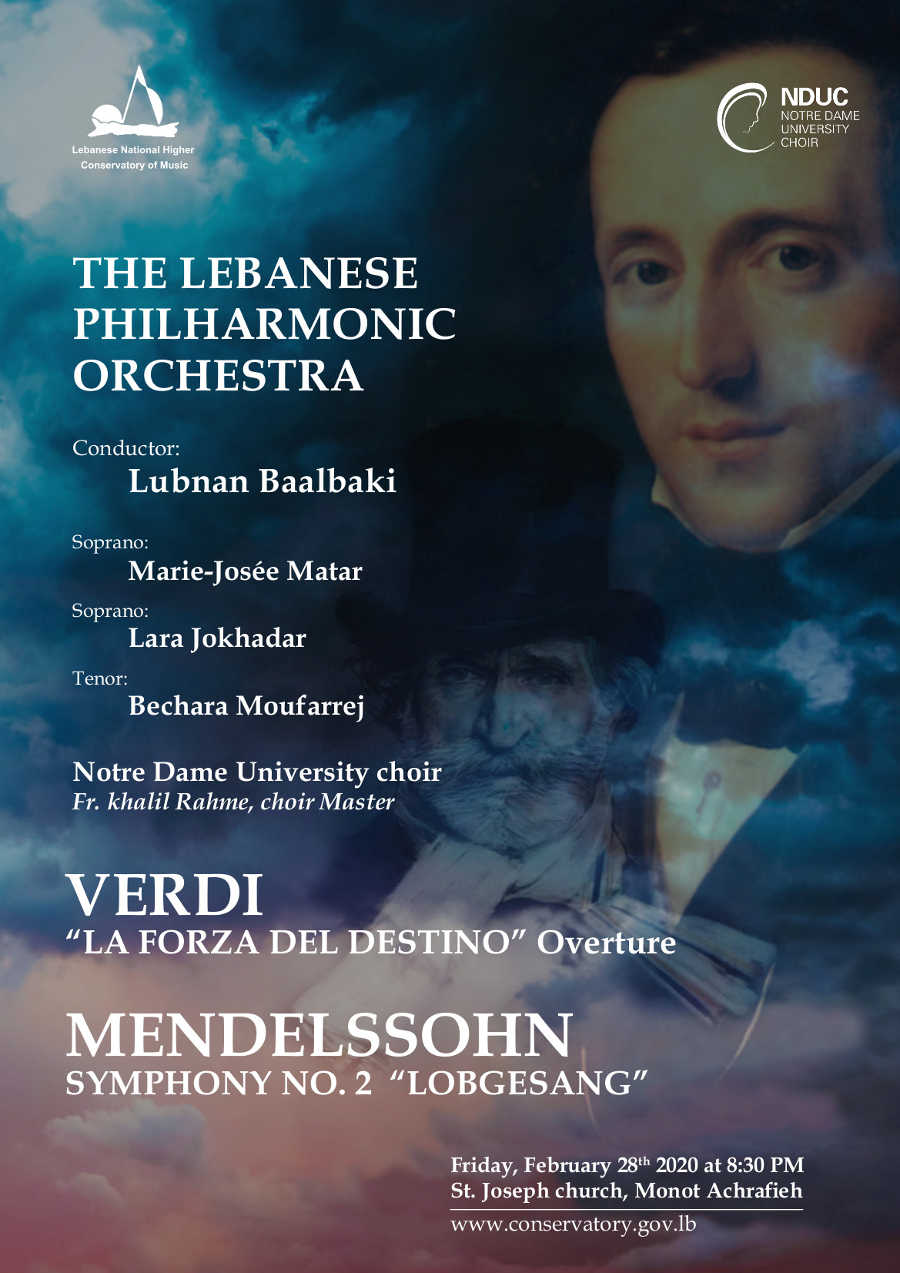 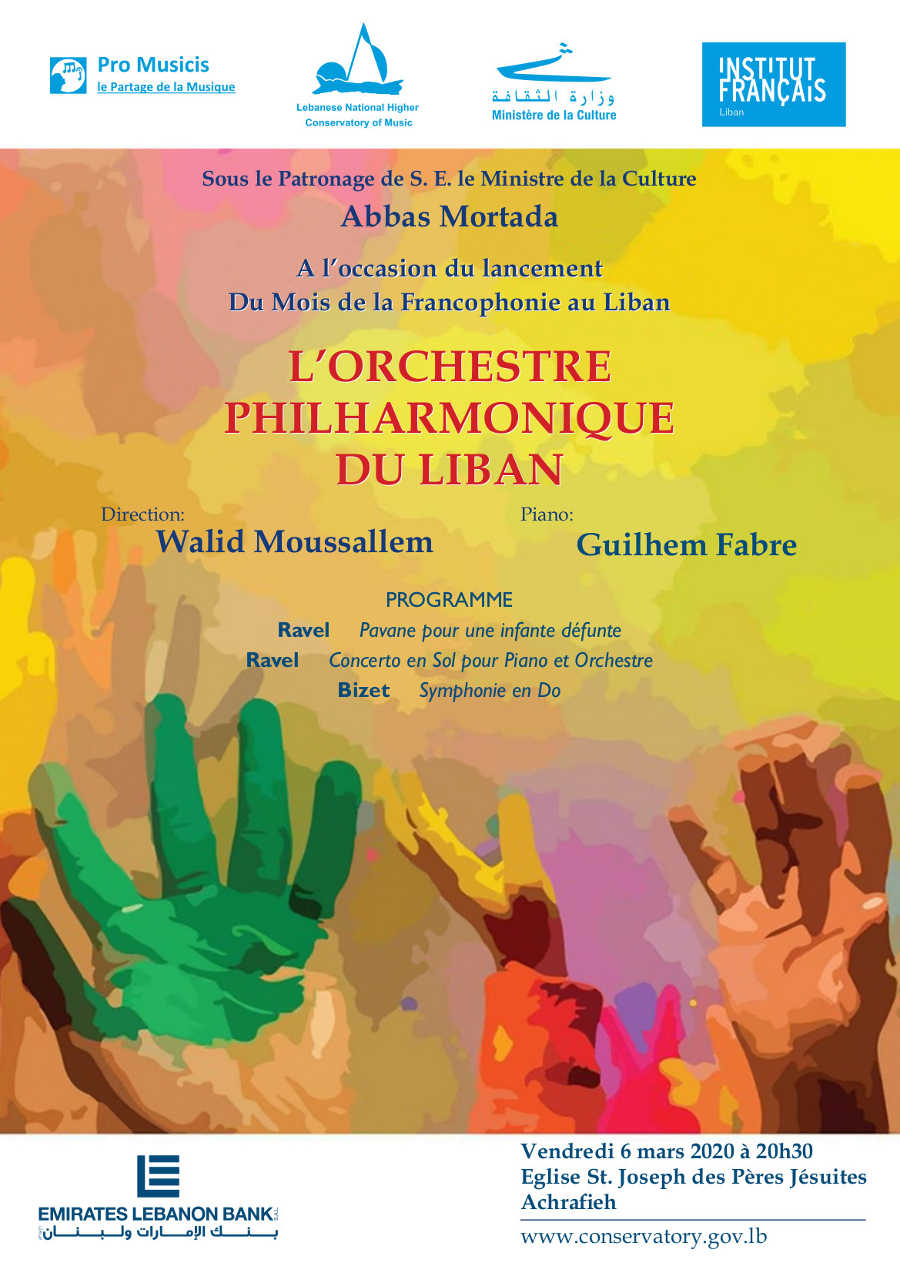